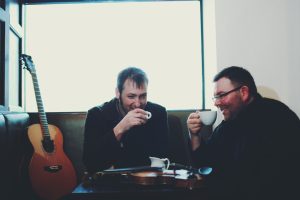 Linchpin figures in Orkney’s traditional music, they unite these deep-rooted sources with an exhilarating breadth of influence and expertise, catalysed by a creative empathy born from decades of friendship. The result is a sound of equally thrilling raw attack and multi-dimensional richness.

Across 15 years performing together, Douglas (fiddle/viola) and Brian (vocals/guitar/mandola) have delighted audiences at many of the world’s top folk festivals, with their focus on traditional Orkney music boldly cross-fertilised with influences from Americana to East European folk, plus a high-octane whiff of heavy metal.

Their fifth album, Bere was released in 2017 to critical acclaim and shortlisted for Album of the Year at the MG Alba Scots Trad Music Awards, whilst recent touring highlights include the opening concert of Celtic Connections 2018, the festival's 25th anniversary.


"A footstomping feast of fun...a class act from start to finish" The Living Tradition