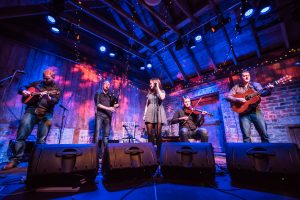 Celebrated Highland supergroup Dàimh are a long‐established festival favourite throughout Scotland, Ireland, Europe and across the USA. Twice named Folk Band of the Year at the Scots Trad Music Awards, the group are unchallenged champions and exponents of straight-up West Highland music.

Taking their name from the Gaelic word for kinship, the five-piece draw heavily from the rich musical well of their West Lochaber and Skye roots - whilst ‘dàimh’ also point towards the electrifying musical interplay between band members, as well as the connection with audiences at their breath-taking live shows around the world. From pyrotechnic jigs and reels to achingly poignant ballads, they run the full expressive gamut of folk music at its best.

 The Chair Dean Owens and The Southerners 