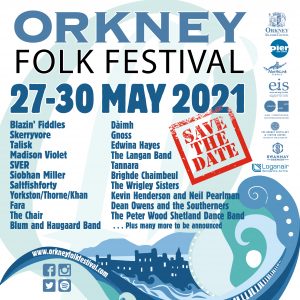 Following an overwhelming response to the first ever virtual Orkney Folk Festival, the team behind the award-winning festival have announced some 22 artists set to appear at the 2021 festival.

As with most festivals and public gatherings in 2020, this year’s Orkney Folk Festival was forced to cancel amidst the worldwide Covid-19 pandemic; the first time in the event’s near four-decade history.

Organisers are therefore delighted to confirm that the vast majority of artists scheduled to be part of the festival this year will instead appear in the county next May, at the rescheduled 38th Orkney Folk Festival – between May 27-30, 2021.

A strong Scottish contingent heads up the bill, complimented by leading artists from Canada, Denmark,...

Why not treat yourself to some limited edition festival merchandise this weekend? Support the festival with some new threads for your next Zoom...

Hope everyone’s getting on as well as can be, in these crazy times.

As you’ll no doubt be aware, this weekend would have been...

Due to the ongoing COVID-19 pandemic, it is with very heavy hearts that we are postponing the 38th Orkney Folk Festival until 2021.